This was quite the year.  I would venture to say, as a whole, 2011 was lovely; up until December that is, for obvious reasons.  But in order to try to keep things positive and upbeat as we move along into 2012, I'll try to stick with the good and highlight some of my most favorite times from the year gone by. 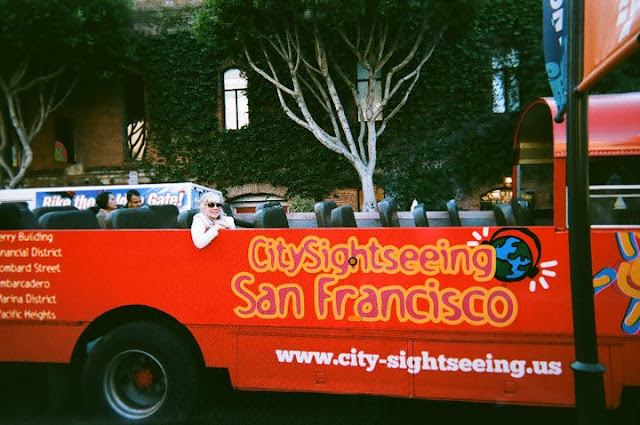 My hubby and I finally made it on our long awaited honeymoon! Or as I like to call it, our mini-moon! We took a short trip to Napa Valley and San Francisco, where we ate and drank...a lot. Then ate and drank some more. Rented a Toyota Prius and had a very head-scratching time trying to figure out how to turn the damn thing on; I mean, there's no key! I press a button? Huh? After figuring out that we probably should have just gone with the Ford Fiesta, we drove off, dreading any occasion where we had to stop at a light, when the panic would set in as to whether or not the car died or just gone all 'electric' on us.  En Route to Napa we pulled over, after another vehicle was frantically pointing at the front of the car, to find out that the hood was moments away from popping up and causing a ten car pile up. How lovely. Death trap aside, Napa was splendid! We rode the Napa Valley Wine Train...for about fifteen minutes. After of which it broke down, which apparently hadn't happened for, oh, ten years or so. But we got our very yummy lunch for free, which is always nice, AND we got ourselves a voucher, on them, to go back another time and try this choo choo all over again.  As the saying goes: when a door closes, open a window! Which was a good idea, as the train had gotten all sorts of stuffy after we lost power.


On our way back to San Fran, I drove the electric death mobile and left my sweet husband in charge of the picture taking. Which he was doing a great job at, up until we realized, after having dropped off the rental car and checked into our hotel, that said sweet husband had left our camera under the seat, never to be seen or heard from again.  Or so I thought. "Well, there goes all our mini-moon pictures!!" I said through tears.  Okay, okay, that's not all I said; I'm not proud to admit that I actually made my new husband cry with my woman-on-the-edge-of-a-breakdown fury that followed.  To make a long story short, we did wind up getting the camera back and I apologized profusely to Caleb for my outburst, as I simultaneously and secretly told myself I would never EVER leave my darling husband in charge of our camera again.


Now, I know this may seem as if I'm focusing on the negative and I promised to stay positive, but all these little quirky and seeming unlucky moments are what actually made our mini-moon so memorable. We always seem to have just a little bad luck, my husband and I, it's sort of become our trademark. And those funny little moments, during which you most likely are pulling your hair out and cursing at anything in your path, actually become what great stories are made of.  Oh, and I drank, hands-down, the best Irish coffee of my life at the Buena Vista Cafe in San Francisco. That alone made everything else worth it.
But the most important happening of January 2011 would have to be...drum roll please... 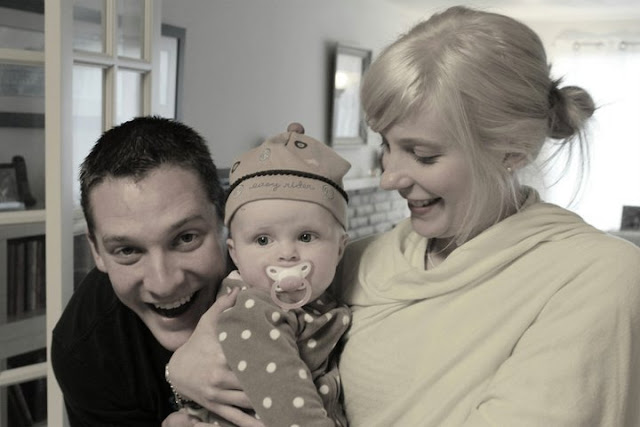 The arrival of little Miss Amelie!
Our darling niece born January 16th.  Isn't she a peach? She is beyond adorable and even though we don't get to see her much, as she and her lovely parents live in Idaho, we love her oodles of noodles!  We hope to give her a cousin someday.  But not just yet; we have to make it back to Napa first so we can ride that train and continue our streak of eating and drinking. Then eating and drinking some more. And I'm not talking water here, folks.  ;) 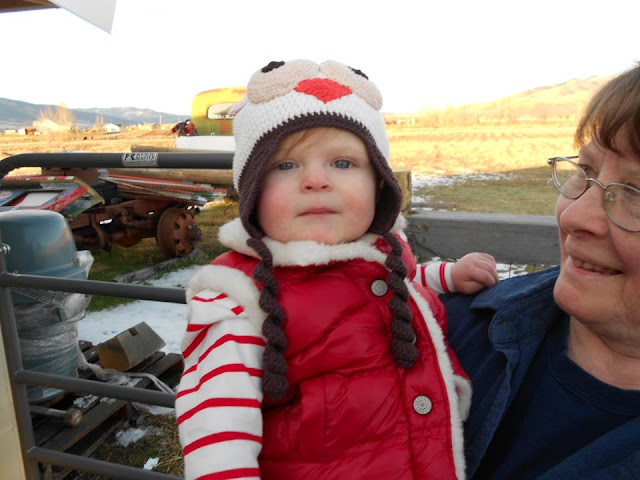 She's a beauty!!!
March
This month found me celebrating my thirty-second birthday! I am now officially as old as Bridget Jones. It's funny, as I get older, or age gracefully, I find myself hitting the age marks of my beloved literary, television and movie characters and thinking, "Gosh, I always thought they were so old." So, I guess that makes me old.  I remember when Bridget turned 33, which I'm on the cusp of doing myself, and how downright terrible she made it seem.  I also remember when Carrie Bradshaw goes to her 35th birthday dinner and no one shows up and she is forced to pay $80 dollars for her own birthday cake and then she drops it as she's crossing the street.  Oh gawd, that would be an awful way to spend a 35th birthday, but she still looked fabulous and that's all that matters, right?  Hey, as long as I'm still getting carded for alcohol I feel pretty good.  And age really is nothing but a number.
For now.
March also found my husband and I, as well as my fantastic mother-in-law and father-in-law, venturing on down to sunny Florida!  My in-laws had won themselves, at auction, a week in a lovely condo in the Orlando area and offered it to Caleb and I; sort of as a second, more official honeymoon.  But we just couldn't bear the thought of seeing The Wizarding World of Harry Potter without them, so the four of us embarked on an adventure to Hogwarts and had a most enjoyable time riding a hippogriff, getting very dizzy dueling dragons and spending time out of the rain at the Three Broomsticks drinking scotch and butterbeer.  It was potter-tastic. If you disregard the monsoon we apparently brought with us.  And no, very nice employees of every establishment we happened upon, it doesn't make us feel better to know if hasn't rained like that in months upon months. It did, however, help that rain apparently keeps throngs of children and their frazzled parents away from Disney World.  So, NO LINES!
See, another great story. 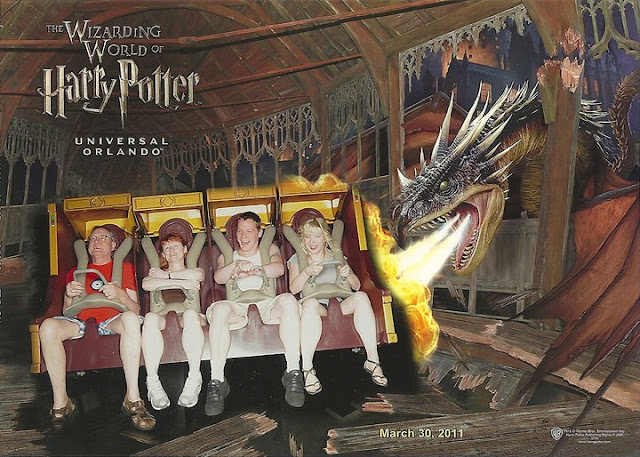 This ride was awesome times ten!
I also got to experience my first NHL game when we went to see the Tampa Bay Lightning courtesy of Ann and George Barnych, long-time friends of my husband's family.  So very happy I finally got to meet them, such a wonderful family and the triplets, Danielle, Jasmine and Nick, are too sweet! Makes me want my own set. Maybe.  We'll see how Caleb feels about that one.
Wow. This going to take a while...post to be continued.... :)
Posted by Miss Jamie Ann at 1:21 PM