READ this Book: Siege and Storm by Leigh Bardugo

Summer is in full swing here in the beautiful Pacific Northwest. Not only has the weather been cooperating (unlike last summer, when it rained pretty much every day until mid-August), which has been a miracle in and of itself, but also, and to moi, most importantly, I am officially done with school for the quarter; can I just heave a sigh of relief while I mutter, "Merci, GAWD!"  Spring quarter is always rough for me, with the possibilities of summer just lurking around the corner and all the reading and crafting that will be mine (oh yes, it will be mine). But this spring quarter in particular was harder than most, made more so by the fact that we've been having so much wonderfully glorious sunshine these past few weeks; it's made studying for accounting as annoying as nails on a chalkboard (or as grating as getting stuck behind someone riding the left lane on the freeway. Hello? That lane is for passing only! Didn't you get the memo?). Nothing flares up my road rage like having to write a paper indoors when the sun is taunting me with it's loveliness. Last Thursday marked the beginning of my freedom (at least until the end of September) and to celebrate I did one of the things I absolutely love to do.

I read a book.

Not just any old book; a sequel to one of my all time favorite reads, Shadow and Bone by Leigh Bardugo. And Siege and Storm did not disappoint. In fact, it was almost better than the first book in the series, in my opinion; but then again, having to pick which I loved more would be like a mother having to choose a favorite child. It's just not right and makes me seriously uncomfortable. So I'll just say I love them both equally and leave it at that.

When Shadow and Bone came out last year, I immediately was intrigued by it. It's premise was new to me. Alina, an orphaned soldier with a secret gift, so secret even she doesn't know of its existence, trying to find her way in the land of Ravka, a Russian-like territory filled with mythical creatures and terrifying monsters. Then there's the Grisha; the magical army led by the charismatic Darkling, a mysterious man who just may be the savior of Ravka, or the source of its demise. Oh and did I mention he's HOT (yes, it is possible to crush on a literary character, I swear!). And then there's Mal. Alina's steadfast best bud and fellow orphan, who has been by her side most of her life, but whom she wishes looked at her as more than just a friend. I know lots of folks harpoon the love triangle in YA lit, but I personally love a good triangle, heck I even like a square!

As an aside, I'd just like to mention that the day I finished reading Shadow and Bone last summer, I checked out Ms. Bardugo's website and found that she was a visiting author at a local bookstore in town on that VERY SAME DAY. To make a relatively short story even shorter, I got in my car, went to said bookstore and got my book signed by the author, then I giggled like a little school girl all the way home. It was pretty sweet.

Moving on...without giving too much away, the story continues in Siege and Storm almost exactly where it leaves us in Shadow and Bone. Alina is on the run, but from whom? And what has happened to the Shadow Fold, the "swathe of impenetrable darkness, crawling with monsters that feast on human flesh?" You'll have to read it to find out. But I will say that the brilliant cast of characters in the first novel expands to include some new ones in the series' sequel. Sturmhond has to be my favorite. He's got his own secrets, like everyone else in this mysterious land, but he's also charming as all get out! I love a man that tries to add lightness to even the darkest of moments, and even in the most dire of circumstances, one can always count on Sturmhond to give a little humorous break from the doom and gloom. And as mentioned above, I think it's safe to say the appearance of Captain Sturmhond turns our love triangle into a love square; hey, the more the merrier! 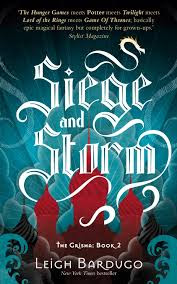 BOTTOM LINE: If you love magic, action, and suspense, sprinkled with romance and the perils of a girl trying to find her place in the world, you will LOVE THIS BOOK. So, what are you waiting for? Pick it up and READ it, damn it! Or I just might have to sic the Darkling on you; but for most of us, that wouldn't be too bad a trade.

I just heart the heck out of it!!!